Last Tuesday saw a return to a classic game for our game group; All Things Zombie by Two Hour Wargames.  It's a solid, co-operative game pitting the good guys against an endless horde of zombies.

I wanted an excuse to use a new toy I picked up at a thrift store for $5.  It is a motorized, music playing carousel for Christmas village scenes. It turns out my gauge of scale isn't that great after all of these years, and it's a bit big.  it still gets the point across, and is a nice centerpiece for games.

Tonight the survivors' camp had just been raided by another band of people.  The survivors chased them through the woods for some time, when suddenly they saw lights and hear music coming from the old amusement park not far away.  The noise began drawing in a solid, thick ring of the walking dead.  The only option for the survivors was to shut down the carousel at the amusement park and sneak back to base. 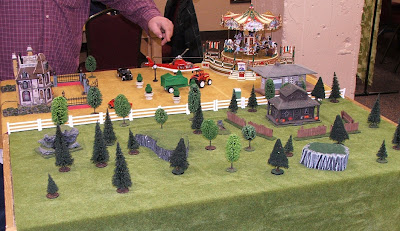 A shot of the table.  The north woods open up into the amusement park.  The center plaza is flanked by the carousel and a haunted house. 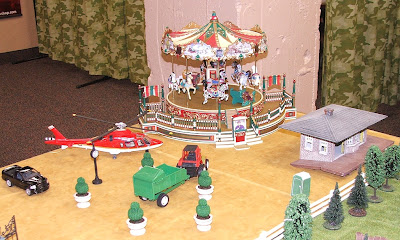 A closer shot of the carousel, pre game. 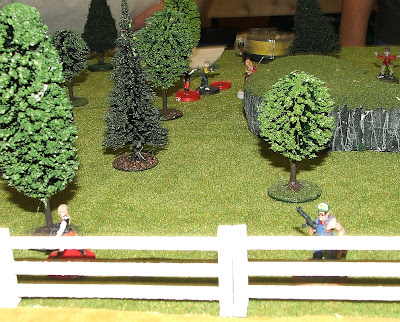 Jed and Sadie reach the outskirts of the park, while the undead begin to close in on the party. 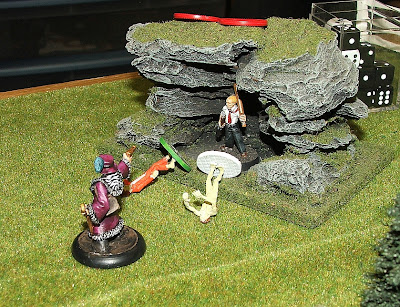 Sean tries to take cover inside a cave and is surrounded.  A friendly chap comes to his aide. 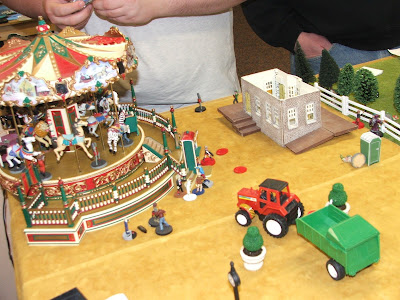 Action a the carousel.  The horde is getting thick, and the mechanical workings of the carousel are a bit too much for the party to figure out... 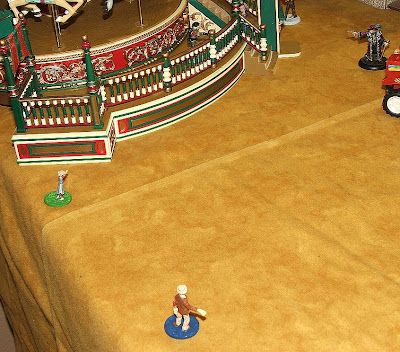 Fending off the hordes as they approach. 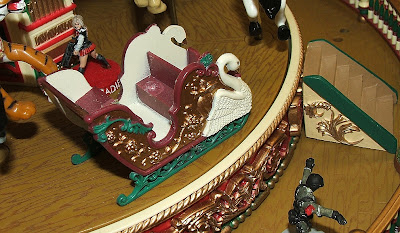 Sadie watches her 6:00 as she pries off the control panel. 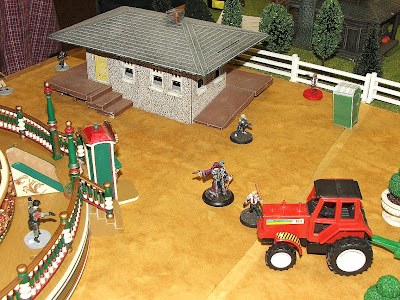 The survivors create a perimeter, guarding against the incoming horde. 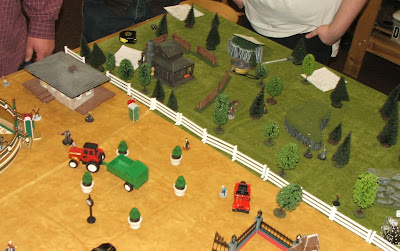 One wide angle shot before everything went to hell...

The carousel proved to be quite difficult to shut off.  The survivors tried logic and a hail of bullets, but the entire thing was finally taken down by Jed pouring his 5 pack of Miller Genuine Draft into the controls and shorting it out.

The survivors made a valiant effort, with only Sean being pulled down and eaten before the ride could be turned off.  Once shut down the survivors mopped up the remaining zombies and made a break for home.

The first half was a struggle, especially with so many failed activations due to a 3rd party showing up in the form of a lone survivor hiding in the portable toilet.  Once the six failed activations in a row were past, however, serious momentum was gained and the survivors made their way home with ease.

Thank you to all who played with us last Tuesday!  It was a test of wills but you pulled through!

Posted by Christopher Lee at 13:24 No comments: Links to this post