Tuesday we gave Speed Rally by Glory Games another play.  The first game we played using very basic pregenerated cars to get a feel for the rules.  This time each player was allowed to make a 2,000 point car for a no weapon restriction race.

For those who aren't familiar with Speed Rally, check out their website.  There is also a review on Miniature Wargaming.

The track was inspired by the short course at Suzuka in Japan.  Here is a shot of the overall track: 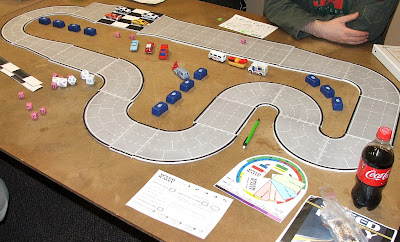 We are running the course "backwards" today because last time we ran it forwards and we want a bit of variety. 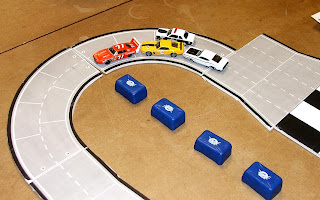 Things space out a bit more through turns 2 and 3 as 71 and the police go in very cautiously. 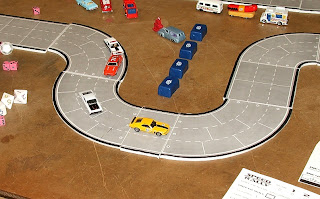 I saw what kind of success 15 and the Gran Torino were having through the turns, so I decided to pour on the power.  I used both of my nitro boosts in two turns.  It looked like it was really going to pay off until I finally failed a skill roll and wiped out in the last corner. 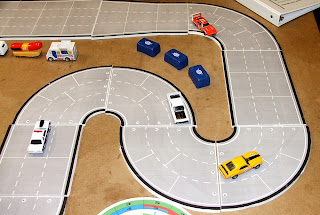 And being I was facing the right way I thought I'd throw down a slick across the track... 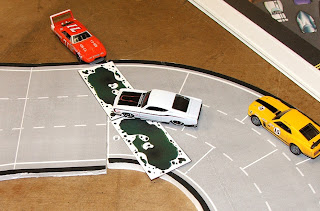 ...which the Gran Torino idled through and the #15 Ford just drove around. 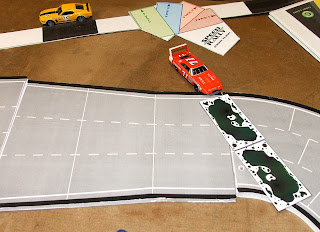 The action after lap 1.  #15 is well in the lead, the Gran Torino in 2nd, the police cruiser trailing a distant 3rd, and #71 just about to finish its first lap. 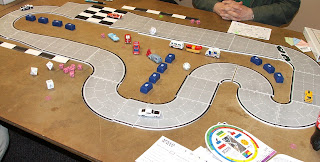 A low angle shot as the leaders power through turn 6. 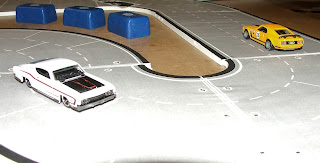 And the back of the pack coming out of turn 1. 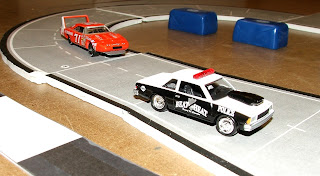 Some of the vendors attending today's race.

Super Trooper, desperately trying to make up some ground, tries blowing through the oil slick.  It doesn't work and he spins around in a circle. 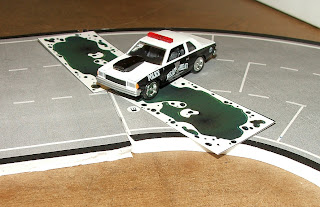 The leaders starting their 3rd and last lap.  The police cruiser is about a half a lap back, and #71 is AGAIN spun out on the track and in a position to be lapped. 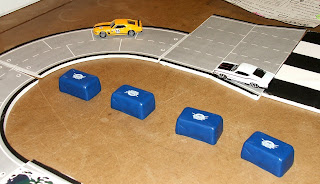 Dick Cheese tries to pass Ivan Jehrkov on the outside.  Ivan responds by tossing a grenade at the Mustang, forcing Dick to swerve out of the way to avoid the blast! 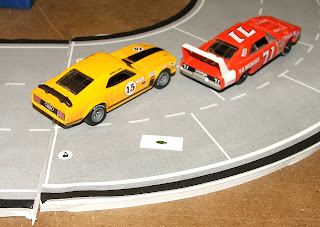 The Grand Torino forces it's way past, making the pass past #15, and forcing #71 careening off the track!  It is now determined that Ivan Jehrkov is the worst villian in racing. 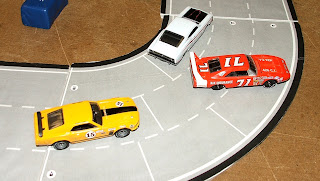 And the final positions.  The Grand Torino pulls out a suprising victory by a mere 3 squares thanks to a good double engine roll and the nitro booster he managed to save for the entire race.  Super Trooper  finished 3rd, and #71 didn't even bother trying... :) 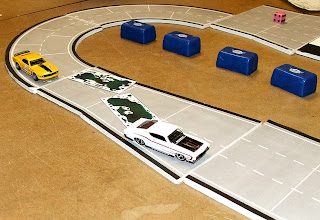 Another shot of the track. 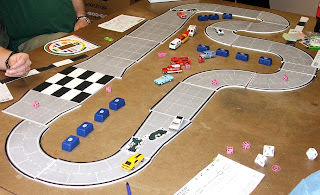 This is a really fun, lighthearted, beer- and- pretzles game.  I would recommend it to anyone who enjoys goofy racing that's quick and easy!
Posted by Christopher Lee at 08:14